For those who would like to consider raw and natural diet for your dog, following is a link to an informative site.  The author gives some good advice on raw diets.  Dr. Becker also advertises her book, but her site gives out a lot of information and sources.  It is a good read.
http://healthypets.mercola.com/sites/healthypets/archive/2011/03/17/prey-model-diet-sparks-online-demand-for-wild-game.aspx

I have raw fed my dogs for about 8 years.  I did a lot of reading and research before I started.  I use the modified prey-model diet and I supplement with grain-free (the ONLY kind for raw feeders) kibble.  I also supplement with pro-biotics and fish oil.
Posted by Judith Martin at 10:38 PM 1 comment:

I recently noticed a dark brown spot on the inside of Adrina's foreleg.  Upon closer examination, I noted it was dark brown hair or wound hair. 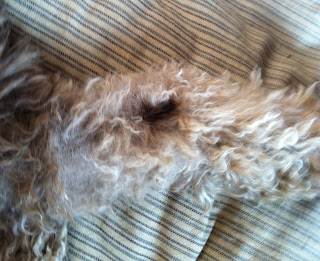 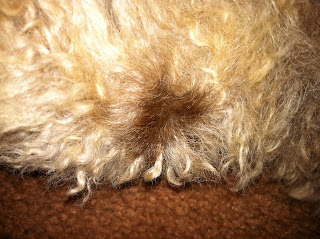 The hairs are currently about 3/4" long and are the color of Adrina's puppy coat.  This is a first on one of my Lagotti but I have seen it many times on the light honey color of Wheaten Terriers.

I did not notice Adrina having a sore on her leg and she did not seem to lick it excessively so I can only assume she had a bug bite or some abrasion causing her hair to revert to puppy coat in that spot.  I searched the internet, without success, for a more technical explanation of the process that creates wound hair and why it comes in as puppy color then grows back to adult color after about 6 months.  Lacking a medical explanation, I will mention a couple of experiences I have had.

The Wheaten Terrier wound hair grows in a dark red or mahogany, similar to puppy coat and which shows up easily on the blonde coat.  Hot spots, surgery and other abrasions are the cause.  My last Wheaten had a digestive melt-down and we almost lost her.  Her hair started falling out each time I combed her.  Once we were able to stabilize her, I noticed new hair all over her body coming in red.  After a bit, I realized this was wound hair and as it grew in, she had a reddish cast to her coat which lasted until I later trimmed it off.

It seems the dog's skin doesn't appear to scar, so the damage or changes occur (IMHO) in the hair follicles, where the dog's body sends a message to revert to puppy coat for a period of time.

I will try to post an updated photo once the hairs start to grow out.  Currently they are brown to the base.


Posted by Judith Martin at 2:41 PM No comments: 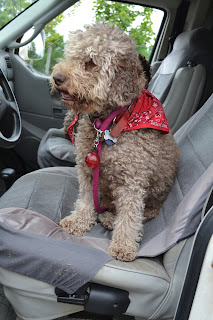 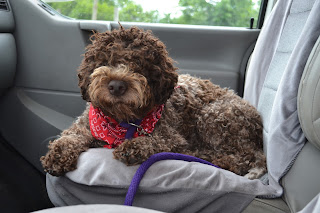 Posted by Judith Martin at 8:34 PM No comments:

Email ThisBlogThis!Share to TwitterShare to FacebookShare to Pinterest
Labels: the girls are ready for our summer trip in the motor home.
Welcome to my blog.  I want to share my love for the Lagotto Romagnolo.  You can check out my website at http://www.lagottoaz.com or go to Facebook and check me out at Shivaree Lagotto Romagnolo.

If you have questions or comments, please post.
Posted by Judith Martin at 7:47 PM 2 comments: